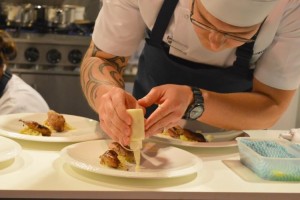 Chefs and cooks have a powerful influence – from supporting small producers to influencing what we eat, from education to community projects, and beyond. Slow Food’s Scottish Chef Alliance recognises and supports those efforts as they help to build a ‘good, clean and fair’ food culture in Scotland.

In the era of the celebrity TV chef and the superstar bakery show, chefs and cooks have come a long way from a quiet place in the kitchen. Now numbering over 550 chefs across the world, the Slow Food Chef Alliance puts that influence to work in the interests of a healthier, more sustainable food system, respecting local food traditions and supporting local produce and producers.

Launched on 12th September at a reception hosted by member Colin Clydesdale at his iconic Glasgow restaurant The Ubiquitous Chip, the Slow Food Scotland Chef Alliance will join similar networks from countries as diverse as Albania and Canada, Mexico and Italy.

“The Chef Alliance chimes exactly with the values we live by at Café St Honore. For example, strong relationships with small local producers are key, as well as putting those lesser-known Scottish foods and traditional recipes on the menu that deserve attention. It certainly means something to our customers too, being part of a network of chefs thinking the same way.” Neil Forbes, Café St Honore 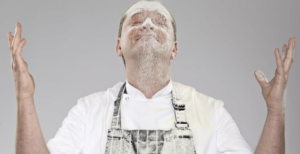 To be part of the Alliance, chefs must, for example, meet protocols such as using Ark of Taste* products, supporting small local producers, being transparent about sourcing with their customers and engaging with local Slow Food groups, all in the spirit of ‘good, clean and fair’ food.

Chefs must be paid-up members of Slow Food, but there is no additional cost for the chefs to be part of the scheme.

“I’m able to supply Shetland lamb, one of Scotland’s Ark of Taste products, to Chef Alliance chefs because they understand and value what it takes to bring such a small-scale, high-value food to the table and are passionate about knowing exactly from where the best quality comes.“ Richard Briggs, Shetland Lamb farmer 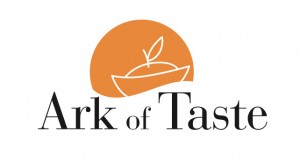 “As we build the Scottish Ark of Taste, the involvement of Chef Alliance members is vital in supporting foods that are crying out for exposure and support in the face of the forces of industrialisation and standardisation.” Wendy Barrie Slow Food Scotland Ark of Taste Convenor

Membership is now open not just to chefs working in restaurants, but to those in other settings such as markets and street food stalls (as long as such settings are open to the public). Membership is for the chef, not the restaurant. So when chefs leave the business, they take membership with them.

The Alliance, a key project of the Slow Food Foundation for Biodiversity, is a network uniting chefs from around the world who are committed to defending biodiversity, traditional gastronomic skills and local cultures, and supporting quality food producers.

Chefs joining the Alliance become Scottish members of both the Slow Food in the UK Chef Alliance, as well as the international one.

Chefs will be promoted via the Slow Food in the UK Chefs’ Alliance and Slow Food International websites and communication channels, providing a strong platform for national and global recognition and networking.

There is now even a global Chefs’ Alliance Facebook page.

Besides the networking opportunities across the Slow Food movement at home and abroad, Alliance chefs will have the chance to represent Scotland at international events such as Terra Madre.