A dozen students from Queen Margaret University’s Masters programme in Gastronomy are  attending the world’s largest gathering of cheesemakers, buyers and cheese enthusiasts, together with a raw-milk cheesemaker from Scotland. 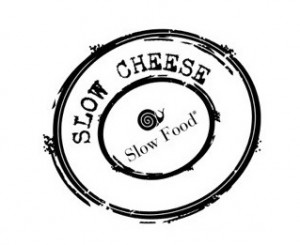 Entitled simply Cheese, the biannual event is organised by Slow Food International in its home town of Bra, near Turin in Northwest Italy. Bringing together participants from around 25 nations, including 300 exhibitors and 270,000 visitors, the event features street stalls, markets, conferences, workshops and cinema screenings.

From Lanarkshire to Italy.

On the trip, they are accompanied by Angela Cairns, a cheesemaker from Errington Cheese. Errington produces soft, hard and blue farmhouse cheeses made from the milk of their flock of sheep in the Pentland Hills near Biggar in Lanarkshire, Scotland. 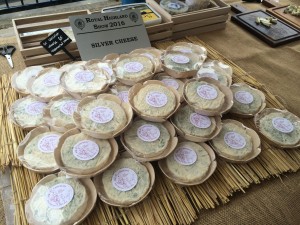 The presence of a Scottish cheesemaker in the group gives the students an opportunity to put local cheese in an international context alongside many of the world’s best-known cheesemakers and their  cheeses and cheesemaking traditions from across the world.

A key theme of the festival, celebrating its 20-year anniversary, is to celebrate cheese made from raw milk. While this method includes many of the world’s most famous cheeses including Parmesan, Gruyere, Roquefort and original English Farmhouse Cheddar, and is regarded as fundamental to the character, distinctiveness, taste and health of these great products, many raw milk cheese producers are under pressure from regulatory authorities concerned by the potential presence of harmful bacteria in the milk used for cheesemaking or, occasionally, in the cheese itself.

At Cheese, Angela Cairns was invited to contribute to a conference attended by around 300 delegates entitled ‘The State of Raw Milk’. Held in the Teatro Pollitema in Bra, the gathering heard from over a dozen cheesemakers from countries including France, Spain, Australia, Ireland, Mexico, South Africa and Turkey. 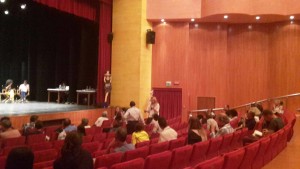 Cairns’ explanation of the situation in Scotland was one of many relating to the challenges facing raw milk cheese producers and the different ways they have been able to meet or overcome the prejudice, ignorance and inconsistency of the regulatory authorities. While the hostile situation faced by Errington in Scotland, and by implication all other raw milk cheeses in Scotland, including Isle of Mull cheese which is being exhibited at the festival, is not unfamiliar to cheesemakers from elsewhere in the world, the sense of solidarity and support for the Scottish situation from the gathering was clear. 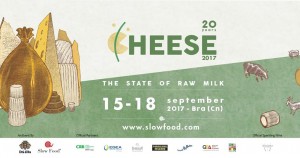 Donald Reid, lecturer on the Gastronomy programme at Queen Margaret University, said, ‘The presence of Angela as part of our group helps emphasise to our students how Scotland is relevant to a globally-important food gathering. Part of being a nation proud of and promoting its food and drink on a world stage is seeking a better understanding of the complex, but vital issues around food, the way it’s produced and the way it is appreciated.’

Unique stories in every bite.

He added, ‘Coming here it’s obvious that cheese made from raw milk is not just tolerated in Italy and many other countries, but celebrated and embraced as a vital part of a living food culture. Few other foods communicate geography, diversity and heritage in such an edible package. Every piece of great cheese tells a unique story. At the moment, Scotland’s cheese story is really quite a negative one. Being here, we have a glimpse of its potential to be a story we could tell with relish.’